This morning as I awoke, my neighbor texted me the following: “I would like to know how you rate Trump as President? Greatest ever? Mentally flawed? Worst President ever?”

I try to avoid snap judgements, but a text demands an immediate reply, hopefully tempered by observation over 4 or 5 years.  My reply: “A tragic figure. Could have been great but was fighting an impossible battle hindered by significant personality defects.”

The word “defects” was a  mistake. It’s subjective. Many successful people have unusual personalities, hypomania, maybe even bipolar.  They achieve great things that many of us cannot or chose not to accomplish.

I should not have said defects.

Psychiatrists raged against Trump. Some even volunteered a diagnoses – narcissistic personality disorder.

That’s ridiculous. Narcissism is the public currency of Facebook and Twitter. It is known to be more prevalent among men and boosts self-esteem.  Sadly most of us cannot convert our narcissism into leadership.

Everybody on Twitter and Facebook are narcissists.  It has unconvincingly been called a disorder to associate it with a billing code.

Maybe those who declared Trump a narcissist  were not psychiatrists, like the ones who prescribe serotonin re-uptake inhibitors.  Maybe they were the ones who listen and nod.

The more circumspect among them questioned the ethics of whether mental health professionals should publicly declare mental health opinions.  That seems reasonable.

I have no doubt that Trump is a patriot. His every deed said, “America First.”

Yet, his methods and rhetoric alienated a lot of people.  The entire political world feared what they regarded as his rejection of accepted diplomatic norms. Today Europe and China are undoubtedly looking forward to power politics as usual.

My Swiss PhD friend, who is uncommonly logical and unemotional was pleased to see Trump go. When I asked if he were speaking for all Europeans, he assured me that Angela Merkel was also happy to see Trump go.

Perhaps his assessment is actually unemotional and logical, although that’s highly doubtful given the universal nature of human bias. 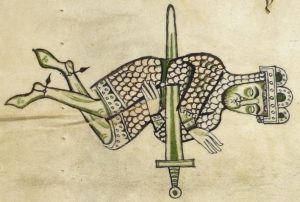 Saul falls on his Sword (from the Worms Bible,  c 1148),  rather than being murdered by his enemy.

Naivete’ or chutzpa.  I suspect the latter. Flagrant boldness with little fear of consequences.  It took a century for politicians and lobbyists to build the federal bureaucracy. Who could presume to clip its wings in a few short years?

Did he fall on his own sword? Did he commit political suicide or was he assassinated?  Did the Swamp win?  Is the Swamp real?

Advocates of Swamp Draining are in disarray. Their sorrow is palpable. The hero is gone. There will not soon be another hero.

Congress made a mockery of impeachment.  They squandered their time and credibility with over-reaching accusations.

Will Trump be judged harshly as a twice impeached president, or will his unrelenting persecutors bear the shame, not of their political theater but of the unintended long-term consequences of frivolous impeachments. Impeachment doesn’t even carry the weight of a vote of no confidence in a parliamentary government.

There were a lot of perplexing questions during the Trump presidency.

Why was there such visceral opposition to him even before he was sworn in?

Why did half of a polarized nation fall in behind Trump and cheer him on, while the other half twisted in the political winds in anguish?

Why will half of a divided nation now fall in behind President Biden and cheer him on, while the other half will… ?   Who knows?

Major pieces of the Biden Puzzle are missing, presumably lost. While the honeymoon lasts, the media has filled in the pieces with roses.

Join
The Enemy of my Enemy is my Friend