Articles
You are here: Home / Articles / Featured / Senators betray their Oath of Office to further their Political Agenda...

Article 6 of the Constitution

The oath of office for United States Senators is required by Article 6 of the Constitution. It’s text is as follows:

“I do solemnly swear (or affirm) that I will support and defend the Constitution of the United States against all enemies, foreign and domestic; that I will bear true faith and allegiance to the same; that I take this obligation freely, without any mental reservation or purpose of evasion; and that I will well and faithfully discharge the duties of the office on which I am about to enter: So help me God.”

Yet their actions in confirmation hearings shamelessly ignore the Constitution and reveal their partisan biases.

The same Article 6 of the Constitution has a clause that reads: “… no religious Test shall ever be required as a Qualification to any Office or public Trust under the United States.”

Candidate grilled over her Religious Beliefs

During a September 6, 2017 Senate hearing to confirm Professor Amy Coney Barrett to the 7th federal appeals court based in Cincinnati, Ohio and Chicago Illinois,  several Democrat Senators grilled her about how her religion would inform her decisions if she were appointed to the Court of Appeals.

“When you read your speeches, the conclusion one draws is that the dogma lives loudly within you,” Senator Feinstein said of Barrett’s writings. “And that’s of concern when you come to big issues that large numbers of people have fought for for years in this country.”

Senator Richard Joseph (Dick) Durbin, (D, IL) himself a Catholic, seems to forget the Constitutional proscription about making a religious test for any office, including judges.

Senator Mazie Hirono of Hawaii asked another religion based question.  “You wrote about the duty of Catholic judges in capital cases,” she said. “In spite of the fact that you had written in an earlier article that Catholic judges—and you would be a Catholic judge—you would not recuse yourself from death-penalty cases?”

Senator Sheldon Whitehouse, (D-RI) observed while grilling Judge Joan Larsen, “To sit here and pretend that there is no role for people’s personal or private views or their social views when they go to the court—it’s just, it’s so preposterous as to be silly,”

What is silly and preposterous is that the American public elect professional political hacks that are making public service into a lifetime profession. Fortunately the Madisonian model of government appears to be still functioning, especially with the election of Donald Trump. Agree with him or not, his “Drain the Swamp” metaphor has caught on with a sizeable fraction of the public and the sentiment may persist past his presidency.

While the Madisonian Model has been modified by the 17th amendment and continual calls for direct democracy have the potential do destroy the safeguards the founders laid down, a vigilant, well informed, and well educated electorate may be able to protect our legacy. 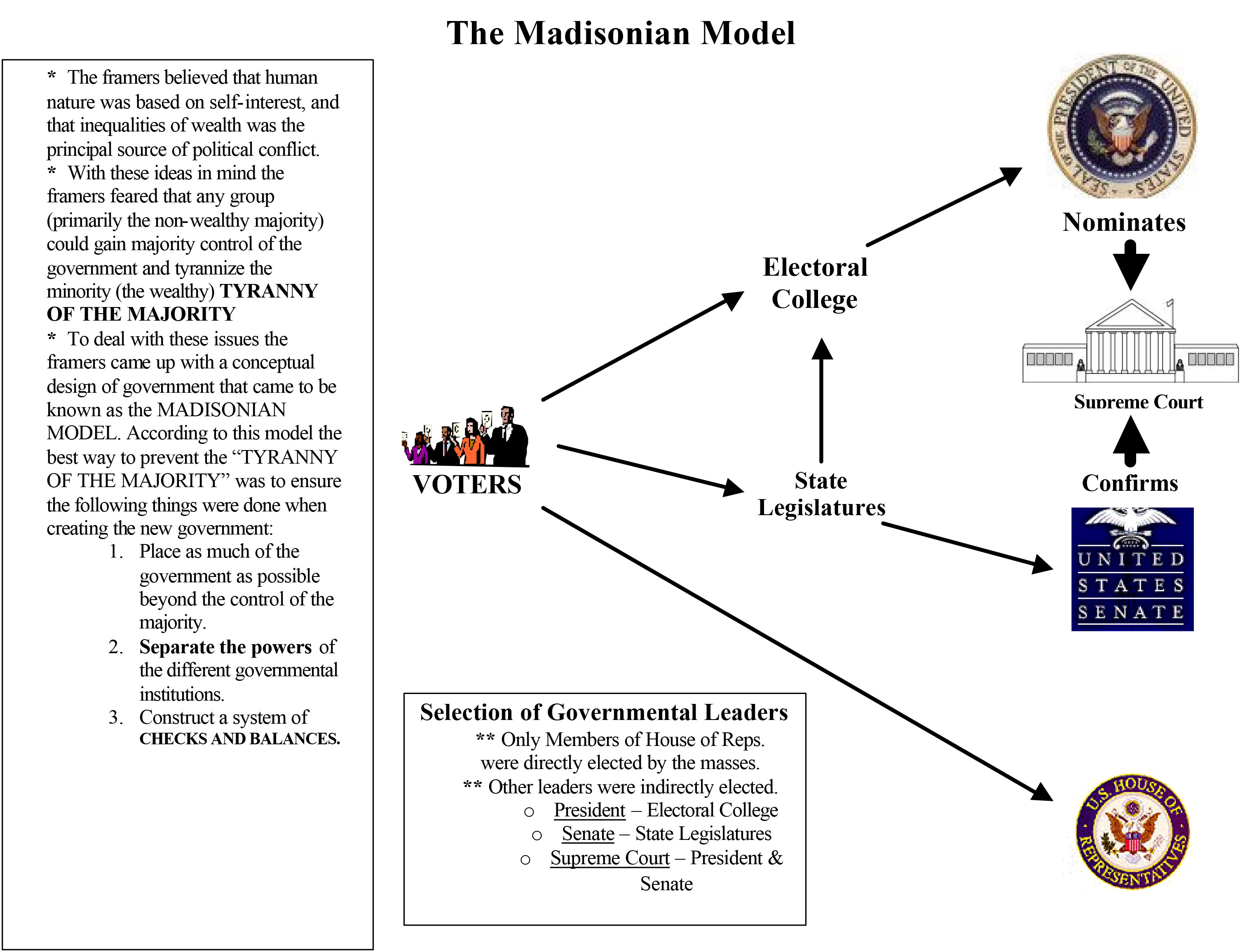