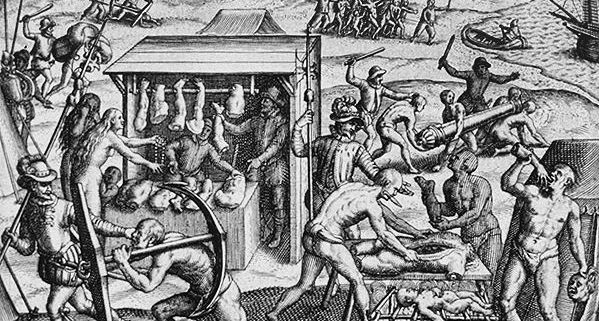 On October 11, 2019, President Trump issued a proclamation declaring October 14, 2019, as Columbus day. He did the same in previous years as did presidents before him since the day was made a national holiday in 1937 by Franklin Delano Roosevelt.

This year whoever wrote the proclamation for Trump cited Columbus’ ” intrepid pioneer’s spirit of adventure.” He also mentioned “16 million Americans who claim Italian heritage and to carry forth the legacy of generations of Italian Americans who helped shape our Nation.”

Tens of thousands of people marched up Fifth Avenue in Manhattan for the 75th annual Columbus Day Parade. It’s more a display of Italian solidarity and ethnic pride than it is celebrating the virtuous life of a presumed fellow Italian.

Christopher Columbus was not Italian 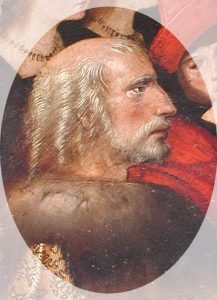 Christopher Columbus depicted in The Virgin of the Navigators by Alejo Fernández, 1531-1536.

Columbus was not Italian. He was born in the Republic of Genoa, known in the 1400s for its banking and trading while occupied by the French. It was also known for its slave trade.  Cristoforo Colombo left Genoa and went to Spain, where he became known as Cristóbal Colón, genovés.  His own penchant for slave trading had little to do with his birthplace.  Slavery was endemic. When he could not reward his Spanish masters with gold, he opted to give them slaves instead.

It’s time to stop the charade. Americans of Italian descent cannot be proud of the scoundrel.  Spaniards should not be proud of him either. By today’s post enlightenment standards he was a rapist, mass murderer, thief, tyrant, scoundrel, pimp, masochist, sadist, opportunist, fraudster, kidnapper, slave trader, charlatan, deceiver…  But so were many of his coreligionists. He was a man of his time.

A national holiday is to commemorate an important event in the nation’s history.  Columbus did not discover North America. He made no meaningful contribution to our history.  If the inhabitants of Hispaniola believe that Columbus made Haiti or Dominican Republic a better place, let them commemorate Columbus’ landing there and decimating the native population.

Making Columbus Day a national holiday was a mistake. The best way to fix a mistake is to cancel the holiday, not rename it to celebrate the victims of European colonization.

The story of European colonization of the Americas is plagued by revisionism, as is most of the world’s history. Romantic stories of intrepid explorers and colonists fail to portray the brutality of those earlier times. To judge them by our current standards is a mistake and is a form of chronological snobbery. Native Americans, Indigenous Peoples were certainly victims of a clash of civilization. Such clashes have always happened and continue to happen.  How they are portrayed in history falls victim to human imagination.  Author Washington Irving contributed to the pro Columbus myth in 1828 with his fictional biography, “A History of the Life and Voyages of Christopher Columbus.” In it he portrays Columbus as a friend to indigenous peoples.

Columbus wrote memoirs of his voyages, mostly to document why the king of Spain should pay him 10% of everything gained from his exploits.

Columbus’ son also wrote a history of his father. We will never know whether the father invented his history and the son believe him and wrote an account of it, or if the son knew the history was false and perpetuated the fraud to enhance is own reputation. The Cristóbal Colón family was in it for the money. The narrative was part of that claim for money.

Columbus and his brothers were eventually charged with crimes and spent time in jail until King Ferdinand released and eventually pardoned them.

Bartolomé de las Casas is known for writing an accurate depiction of Columbus’ and Spanish atrocities.

Columbus happened to come along at a time that European Monarchs were looking abroad for treasure. Sailing ships and navigation advanced to the point that they were more reliable.  It was the dawn of an age of exploration. If Columbus had not conned the king of Spain into finance his venture,  others would have done so. And indeed, others did.

Early globalism, starting around the time of Columbus  resulted death and destruction on both sides of the Atlantic. Native people died from European brutality and diseases while the royalty of Europe were among the first to experience the wrath of Syphilis, which has been demonstrated archeologically to have existed in the pre-Columbian Americas.  It soon spread among the soldiers of Europe and from there around the world.  This is nothing to celebrate.

One problem with dumping Columbus Day is widespread perception that Columbus actually contributed something.  He did not. Italian Americans have adopted a myth that has taken on almost religious proportions.  The holiday and parades are now tradition. This article in the NY Post illustrates an emotional appeal to keep the holiday.

Rather than trying to substitute Indigenous Peoples’ Day for Columbus Day, expand the scope of the holiday to celebrate the Age of Enlightenment/ Age of Reason that directly led to the U.S. Constitution. It took place in Europe during the 18th century, well after Columbus’ atrocities of the 15th century. It undermined the authority of Europe’s monarchs and paved the way for the American Revolution.

If that is not a good enough reason for a national holiday, simply declare the day as the first day of the Christmas Shopping Season.

Join
Is Self-Defense a Natural Right? Impeachment
Scroll to top