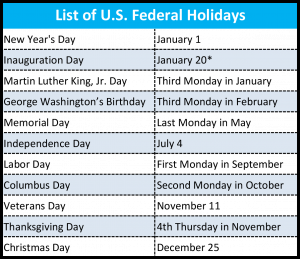 Constitution Day in the United States has become a bit of an afterthought. The Constitution is who we are as a people. We should celebrate it, not Cristóbal Colón.

Apple does not add Constitution Day to the calendar that pops up on iPhones.  A Google search of U.S. Holidays only shows the big ten U.S. holidays – the ones Congress  designated as federal holidays.  Another, Inauguration Day is an 11th that’s celebrated once every 4 years on January 20.

Constitution Day is celebrated across the country on November 26 to commemorate the adoption of the Constitution… in India.

India has a great constitution. They borrowed it from other constitutions: Parliamentary government from Britain; Method of election of President from Ireland; Impeachment of the President from the United States; A few nice things from South Africa, Canada, France, and Australia;  5-Year Plans from the old USSR; Suspension of Fundamental Rights during an emergency from Germany; and Article 21, which they got from Japan – “procedure established by law.”

We have something similar to Procedure Established by Law.  We call it “Due Process,” but the Indians purposely left our version out of their constitution. Our version,  Due Process, says that if you are accused of breaking a law, you have access to courts and maybe even a trial by jury.  The law of which you are accused of breaking might even be declared unconstitutional and the whole law thrown out. In other words, due process means you might get justice.

“No person shall be deprived of his life or personal liberty except according to procedure established by law.” (Article 21. Indian Constitution)

“… nor be deprived of life, liberty, or property, without due process of law…”  (Amendment V, Constitution of the United States)

Police brutality occasionally happens in our Republic, and due process can fix it.

Notice that we also have property rights along with life and liberty.

In his 2015 book, By the People, Rebuilding Liberty without Permission, Charles Murray says that the government our

founders gave us to protect our rights is no longer functioning. The Constitution has been discarded. Pretty strong language.

In the preface to Part I entitled,  Coming to Terms with where we Stand, he summarizes what has happened after the Constitution was signed on September 17, 1787

Inextricably embedded means that the solutions are beyond the reach of the electoral and legislative processes. We can’t just vote them out. They resist change because too many people live off the giant federal government.

He covers a lot of territory in his book. Too much to discuss here. One small part serves to illustrate the problem.

The regulatory government has grown so large that there is a regulation for almost everything. If you break one of those rules, an unelected federal bureaucrat (or public servant depending on your point of view) may assess a very large fine or even seek jail time.  You certainly can fight it in court because you have due process.  But wait, the lawyers say it will cost a million dollars to fight it all the way to a district court, or to the U.S Supreme Court. You don’t have that much free cash at the moment so you do what most people do. Negotiate something you can live with short of going to jail. The regulators win.

Charles Murray has some suggestions in his book but even he says such ideas are a long shot. Like Civil Disobedience.

It took a long time to build the regulatory state and, if it is to be repaired, it will take a long time and a populace demanding that it be done.

Constitution Day, a federal holiday with time off from work and an adequate budget, might refocus the nation’s attention to our founding document. A more robust Constitution Day will never become reality until people who are deeply concerned about the rights of the minority and the electoral college start pressing to have a day that really focuses our attention on the Constitution, not Citizenship Day.

Get Rid of Columbus Day

Get rid of Columbus Day and make Constitution Day a 4 day weekend to show it is something special. It could run from the first Friday after September 13 until the following Monday – Friday, Saturday, Sunday, Monday.   Everybody off from work, spending money and traveling for 4 days.  Fifty years from now, everyone will look forward to Constitution Day and nobody will ever remember a holiday for the explorer who enslaved native people in the Caribbean.

How does the Constitution spell   “choose?”  How many times. Does spelling count?

Which words are misspelled?

Which sections of the Constitution have been changed by amendments?

…House of Representatives shall choose immediately, by ballot…

The House of Representatives shall chuse their Speaker…

Join
9/11 Should NOT be a National Holiday

One Vote Away: How a Single Supreme Court Seat Can Change History
Scroll to top