Articles
You are here: Home / Articles / Featured / The Enemy of my Enemy is my Friend 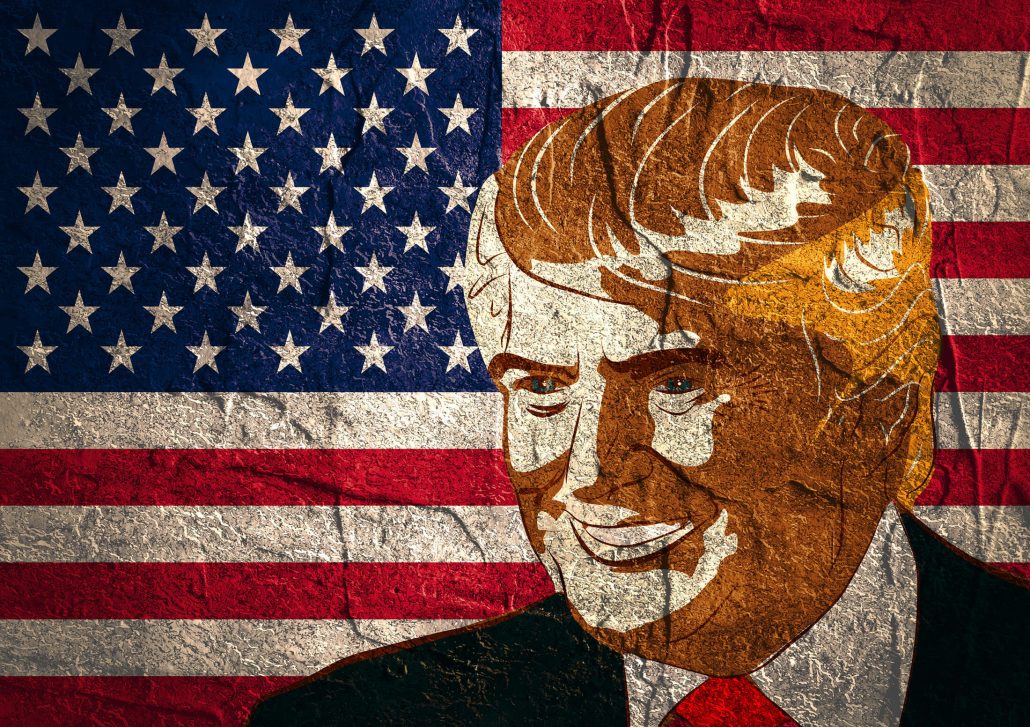 Trump is my Friend

I do not know Donald Trump. Most people do not know him but everyone has an opinion of him. The President may not know himself very well. We cannot know how well he knows himself any more than most of us know ourselves.

The  emotional response to Trump is reminiscent of the high emotion of religious conflict of Northern Ireland, or of any of the other such countless conflicts from the Crusades, Thirty-Years War, or the obscure Nagorno Karabakh.  Our species is, after all, not very logical or unemotional.

I accept that my support for Trump may be emotional, but I would like to think it is based on something more pragmatic than emotion.  Perhaps this is the reason. The Enemy of My Enemy is My Friend.

The Enemy of my Enemy is my Friend

The ancient Greek aphorism “Know Thyself” is the first of the three maxims in the forecourt of the Temple at Delphi. The other two are “Nothing to Excess” and “Surety Brings Ruin.”  The aphorisms of ancient people certainly seem to be logical admonitions. I hope the President is a student of ancient wisdom but he doesn’t seem to be.  Nevertheless, being President doesn’t require an encyclopedic knowledge of of such minutiae.

Accepting the wisdom of the ages is a logical reason to support Donald Trump, and it is a good defense when somebody challenges your decision. In spite of the Internet, mass media, and all of the other modern reasons that we deem ourselves to be superior, human wisdom has not materially advanced during the last 2,000 years. Certainly a lot of wisdom has been lost because no one wrote it down. It doesn’t matter because there are wise people now writing wise books, which repeat what has already been thought but not preserved in writing.

What has been written, currently or anciently gives us enough justification to support President Trump.

The Arthashastra is an ancient book about how to run a government. Written by many authors over several centuries, its ideas relate to human nature as much today as they did thousands of years ago. It accepts without reservation that individual states are sovereign. The rejection of sovereignty is at the root of our current global struggle.

Book VI is entitled “The Source of Sovereign States.”  It describes a good country:

Possessed of capital cities both in the centre and the extremities of the kingdom, productive of subsistence not only to its own people, but also to outsiders on occasions of calamities, repulsive to enemies, powerful enough to put down  neighbouring kings, free from miry, rocky, uneven, and desert tracts as well as from conspirators, tigers, wild beasts, and large tracts of wilderness, beautiful to look at, containing fertile lands, mines, timber and elephant forests, and pasture grounds, artistic, containing hidden passages, full of cattle, not depending upon rain for water, possessed of land and waterways, rich in various kinds of commercial articles, capable of bearing the burden of a vast army and heavy taxation, inhabited by agriculturists of good and active character, full of intelligent masters and servants, and with a population noted for its loyalty and good character;–these are the qualities of a good country.

The part about taxation jumps out, and by that standard alone the United States is a good country.

In a day when kings presided over relatively small kingdoms with friendly or not-so-friendly kings nearby, a wise king knew who his friends were even if he didn’t like them very much. Chapter II of Book VI, of the Arthashastra is where we get our aphorism, “The Enemy of my Enemy is my Friend,” although it is not stated so simplistically. Here is how the Arthashastra explains it.

The king who, being possessed of good character and best-fitted elements of sovereignty, is the fountain of policy, is termed the conqueror…

The king who is situated anywhere immediately on the circumference of the conqueror’s territory is termed the enemy.

When Trump won the election of 2016, there was a great outcry of anguish. Many then and now consider Trump a conqueror. They hate his personality. They believe a mainstream press that labels Trump a Nazi-sexist-homophobe-white-supremacist-systemic-racists.  The people who pay attention to those accusations are  citizens and voters. Does that make them an enemy?

Who is the Enemy?

There are many enemies, just as there are many friends. Unfortunately it is often difficult to know the difference.

Enemies, people you simply don’t like, can be factitious (created by humans) enemies, not really enemies. The real enemy may be the one you cannot not see, an idea.

Will you accept as one definition of enemy, one who seeks to deprive you of your Liberty?

The people of Hong Kong can see the enemy; they know the enemy. We naive Americans watch our network news programs and are told how terrible Donald Trump is. They want to make him the enemy. But are they the enemy? Donald Trump says they are.

Bernie Sanders is a Socialist, but he says he is not really a socialist. He is a “Democratic Socialist” without telling anyone what that means. Superficially Bernie Sanders appears to be a shallow politician who seeks personal power by offering to give free stuff away to a greedy electorate.

Richard D. Wolff is a Socialist, but he is also a leading Marxist scholar. He seems to think there is a way to integrate a redefined Marxism into our ostensibly Capitalist world. Maybe Bernie Sanders is a political manifestation of Wolff’s thinking but there is little evidence that Bernie is that smart.

Are Bernie Sanders, Richard Wolff, and other socialists the enemy?  People who know them say they are very nice people. Perhaps it is not they who are the enemy, but their ideas.

Ideas can be a powerful enemy because they persist long after the people espousing them are dead.  Later, others using the ideas translate them into action, often leading to a loss of our personal Liberty. By that definition, ideas become the enemy.

Capitalism versus Socialism or Friends versus Enemies

This commentary is not a dissertation on Capitalism versus Socialism. It’s a commentary about friends versus enemies.

Our U.S. Constitution was created several hundred years after the Dutch and English fought bloody wars over their notions of capitalism. Karl Marx is credited with thinking about socialism but many others before him imagined a better world with ideas of utopia and happiness. Our Declaration of Independence, arguably a preamble to the Constitution, talked about Life, Liberty and the pursuit of Happiness. The pursuit of happiness is important, but happiness cannot be guaranteed. Happiness is too ephemeral, fleeting, subjective. Each must pursue it individually. Friends can help. Enemies don’t care about your happiness.

Our founding documents do not mandate any particular economic model.  The Constitution has been amended to eliminate disgusting economic practices like slavery. Laws and regulations continually try to balance citizens’ rights against the interests of unrestrained free market capitalism.  Can we tolerate monopolies that destroy the ability of small capitalists to thrive?  That is not justice.

An economy is like a great ocean liner. If the engines are simply stopped but not reversed, it will go many miles before stopping. Eventually the passengers will notice that the boat is going very slowly and demand that the engines be started. Recessions come and go.  Money is created. Inflation happens. Politicians get bad ideas and make mistakes. Others may be smarter, but they seem to get out of government sooner than the parasites who stay. Citizens are lazy and stupid but they vote.  Stupidity is its own reward. Such persons are factitious enemies.

The Preamble  to our Constitution states its purpose: Establish Justice, Insure Domestic Tranquility, Provide for the Common Defense, Promote the General Welfare, Secure the Blessings of Liberty to Ourselves and Our Posterity.

Those who would deprive us of any of the five Constitutional Objectives are our enemies.

Is justice served by trying to oust an elected president before he even takes office ?  Or engaging in a sham impeachment? Those who advocated such injustice are the enemy.

Is rioting in the streets and governments’ failure to protect property rights insuring domestic tranquility?  Those who encourage it or who do not condemn it are the enemy.

Trump has declared himself a champion of the five Constitutional Objectives. While cities burn, he has condemned it, not defended it. Deregulation and reduced taxes have spurred the economy. Congress has appropriated more money for the military. Trump agrees with and has taken credit for that.  His Space Force will prove to be important to the Common Defense as military assets of potential enemies are deployed in the space around our shrinking globe.

Trump’s most consequential contribution to the cause of Liberty has been the appointment of three Supreme Court justices and hundreds of Federal Judges who take a more constructionist view of the Constitution.  Those who argue for anything except for strict constructionism are arguing to allow judges to perform the duties and responsibilities of legislators  and the people. Judicial activism may be a way to achieve a fast victory but how can voters hold unelected judges accountable for their deeds or misdeeds?  In this respect, Trumps choices of judges fulfill his responsibility to Secure the Blessings of Liberty to Ourselves and Our Posterity.

Who said The Enemy of my Enemy is my Friend?

Trump may be defeated in the upcoming election. If he is reelected, he will be in office for only 4 more years. Either way, he won’t be on the national stage for very long.

Nevertheless, it’s time to defend Donald Trump, not necessarily the man but the ideas.

I do not know Donald Trump.  He may not know himself.  He says things that I think are silly.  Some people call them lies.

All of that will be gone soon but the ideas will persist:  fake news, mass disinformation, deep state, corruption.  These are all bad ideas.  They are the enemy.

The enemy of my enemy is my friend.