You are here: Home / Breathing is More than just Sucking Air – It’s Exercise

Breathing is something we don’t think about very much, until we are “out of breath,” or “taking a deep breath” to relax, “gasping for breath,” coughing, wheezing, or getting a diagnosis of pneumonia, COPD,  sleep apnea, or any number of respiratory diseases. Just like a lot of other things in our lives, we don’t pay much attention until something goes wrong.  Besides unconsciously breathing just to stay alive, good breathing can affect our health in ways we seldom recognize.  Maybe it is time to learn how to breathe rather than ignoring it until something is broken.

We have all seen people in public using a plastic nasal  cannula to direct oxygen into the nose.  Most of these people have COPD, chronic occlusive pulmonary disease, brought about by chronic exposure to cigarette smoke or other contaminants in the air.  This happens when the lungs become physically damaged.

There are other things that get broken that are not so obvious. The heart and lungs work together as a system to supply oxygen to the every cell in the body. When you become short of breath after light exercise, is it the lungs that are damaged, or the heart, or both?

Sleep apnea is a condition when people stop breathing while asleep. Besides wreaking a good night’s sleep, it has far reaching health consequences. It is associated with being overweight, having high blood pressure, irregular heart beats, strokes, and heart failure, among other problems. Even depression. Does sleep apnea cause these problems or do these problems contribute to sleep apnea. Sleep apnea can easily be measured by doing a sleep study where you are hooked up to monitoring devices including an electrocardiogram (ECG) to monitor the electrical conductivity of the heart.

Heart disease is the number one cause of death among older Americans (65+), and cancer is not far behind.  Until 2008, stroke (cerebro-vascular accident) was the number three cause of death after heart disease and cancer. Now chronic lower respiratory diseases have risen to third place on the list of leading causes of death among older people. It is becoming increasingly obvious that the same inflammatory and degenerative changes that are happening in the arteries are happening in the lungs also.

When do these degenerative changes start in the lungs, heart, and arteries?

Coronary atherosclerosis is the usual contributing cause when a sudden death occurs in an old person. Surprisingly the same is true of young people but at a much lower rate. Heart disease in young people is usually concealed (asymptomatic) and is only discovered at autopsy by means of  macroscopic and microscopic investigation. Autopsies of young people who die suddenly show that cardiovascular diseases accounted for more than 80% of cases and about one-third of those result from undiagnosed congenital  heart defects.

If heart disease begins at a much younger age than we generally recognize, and much higher death rates begin after age 40, what can be done to stay what appears to be inevitable?  Conventional wisdom dictates that we exercise, eat correctly, and avoid obvious risk factors such as smoking.

Smoking is implicated in both heart disease and lung disease because the heart and lungs are both part of the same system, the circulatory system. Rather than think about smoking itself as the culprit, consider that everything going into the lungs is being ingested in a way that is similar to food being ingested into the digestive tract. Everything taken in has a potential toxicity, even oxygen!  It all depends on the quantity, and in the case of oxygen, the pressure and concentration. The toxic potential of anything is related to the dose and length of time one is exposed to that dose.

Eating is similar to smoking because food is something that is ingested into the body. While smoking is universally regarded as bad, food can also be bad.  A lot of attention is given to diet and nutrition but seldom do we think of food as toxic. Nevertheless the same principles of toxicity apply to food and air: concentration and time.

The body has systems  (eg. digestion) that reduce the toxicity of  substances that are ingested, whether through the skin (absorption), through the lungs (inhalation), or through the digestive tract (ingestion) . But the body is not perfect and cannot eliminate all hazards. The lungs cannot handle all pollution. The digestive tract cannot digest all food without suffering occasional adverse consequences.

The key to preventing disease involves more than just controlling what goes into the body.  Humans have the unique ability among living entities to use their intelligence to reduce or eliminate  substances that go into the body and also do things to help the body combat the inevitable ingestion of toxic substances.

The  University of British Columbia recently published a study that disclosed that innumerable viruses and bacteria circulate in the atmosphere. They are literally falling from the sky and we cannot avoid them. Fortunately our bodies have ways to deal with foreign intruders in surprising ways that we seldom think about.

One of the impressive things about our immune system is how it can identify and destroy dangerous invaders while at the same time giving sanctuary to beneficial bacteria and fungi that inhabit our gut and almost everywhere else.  We carry about the same number of foreign cells as we have of our own cells.   These bacteria, or commensal microflora, provide a competitive line of defense against other possibly harmful organisms. Our own immune systems regulates which ones are tolerated and which ones the immune system steps in to actively destroy.

The immune system does more than just destroy invading organisms; it kills off our own cells and DNA that get out of control.  Thus a lot of cells that could be described as cancer are destroyed before they can reproduce.  Yet, sometimes our immune systems turns on us and destroys healthy cells resulting in so-called autoimmune diseases.  The highly complex immune system is integral to, and interacts with, every other system of the body.

The heart is the pump that moves blood through the closed loop circulatory system.

There is another pump that nobody talks about and it, along with every muscle of you body, helps move the fluid in an even larger non-circulatory system than the  blood-vascular system. That system is the lymphatic system and the thoracic diaphragm is a major muscle that helps move lymph through the lymphatic system.

The lymphatic system is sometimes described as the body’s sewer system because it removes waste from around the body’s cells and eventually dumps it into the circulatory system at the junctions of the right and left subclavian and jugular veins.  In reality the lymphatic system is far more than a sewer system; it is an integral part of the entire immune system, which is the only reason we are able to survive in a world that constantly attacks every cell of our bodies. Everything we eat, the air we inhale,bacteria, fungi, and viruses trying to get in, and the bacteria that already live in us, are subject to the scrutiny of the immune system.

Watch the following video to learn why the lymphatic system is so important and then we will discuss why EXERCISE correlates more highly with longevity than even a good diet does. 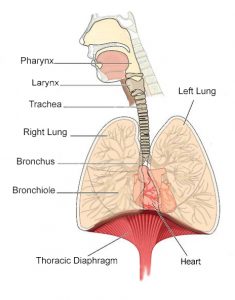 Because exercising is uncomfortable it is easy to put off moving.  Intellectually we know that moving and exercise are essential for optimal health but because it hurts it is all that much easier to put off.

Fortunately something as easy as exercising the diaphragm can help get us back on the road to regular exercise.  Resuming vigorous aerobic exercise can be risky for an elderly couch potato so check with your doctor before starting a vigorous exercise program. Deep breathing exercises are safe and may help you work up to a more comprehensive routine.

Breathing exercises have been around for thousands of years. Along the way breathing has become associated with mystical and religious beliefs that in the minds of some skeptical western observers tend to discredit some practices.  Now ample clinical studies clearly establish the neurological links between the mind, gut, intestinal biome, hormones, and breathing.  Anxiety and depression are clearly influenced by breathing practices.

Yogic breathing exercises are called “pranayama”. The translation of this Sanskrit word is “control of the prana”.  Prana is the vital energy, or life force,  known in Chinese as “chi,” and in Japanese as “ki”.    Yoga breathing techniques recommends different breathing ratios like 1:1, 1:2, 1:4:2, 4:2:4:2.

Yoga teachers get hung up on technique, such as breathing in through the left nostril and exhaling through the right nostril. Perhaps there is some scientific reason for this but we have been unable to find clinical studies.  Some people claim that there are no books about Yoga newer that 50 years old that can be trusted.

A 2017 study entitled “Effects of Bhramari Pranayama on health – A systematic review” found that breathing exercises  predominately affect the parasympathetic nervous system and are effective for a reduction in heart rate and BP, reduction in response to cold pressor test, improvement in cognition, reduction in irritability in tinnitus, favorable EEG changes and reduction in stress levels. But they also criticized the studies for being of low methodological quality and none was  a randomly controlled trial.

Vital capacity is the maximum amount of air a person can expel from the lungs after a maximum inhalation.  It can be measured on a device called a spirometer but as a low tech substitute for the device, this exercise can serve as a rough measure of vital capacity:  Inhale as deeply as possible and then count as high as possible in a regular voice, not whispering. Healthy young people can easily count to 100. Older people make it to 75 or less. With practice, the vital capacity can be improved and presumably lung function improves too.


Here we are discussing a 1:4:2 ratio,  i.e. inhale over some multiple of one second, hold your breathe for a multiple of 4 seconds, and slowly exhale for a multiple of 2. We make no claims that such a ratio has any health benefits over any other ratio or over no ratio at all other that deep breathing. Here is the  1:4:2  breathing tool .  Five is the default multiplier. Experiment with comfortable multipliers and work up to progressively higher numbers to see if your vital capacity improves.