The President caused a major freak-out when he declared that his authority is “total.” Listen carefully to what he so inartfully said. Then realize it is not what President says that is as important as what he does.

As you see in the clip from the Guardian’s coverage of the President’s press briefing, the response from the ever vigilant guardians of truth and justice was swift. 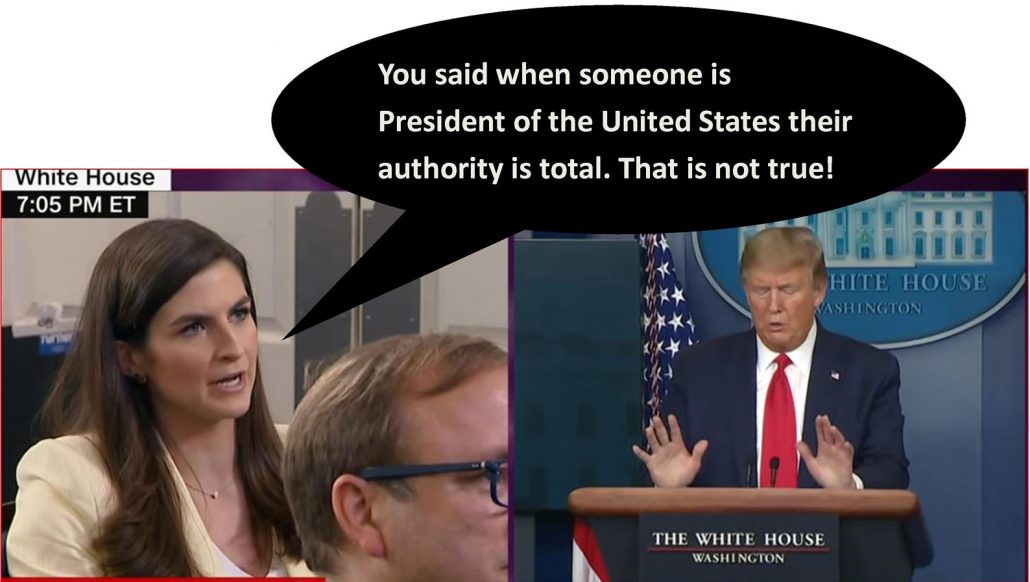 Keep in mind that the philosophical argument about “what is truth” has been going on since the dawn of human history.

Undoubtedly the intrepid reporter who made that bold declaration to the president has her own idea of what truth is. It is her truth, the truth that she subjectively feels. Her intuitive truth.  Perhaps it is informed by her understanding of the Constitution. Perhaps she thinks the Constitution embodies truths that the document itself declares to be “self-evident.” Is it true that all men are created equal?

Some people say the Bible is true. Some say it is not, but those who swear it is true seem to be more willing to die for their beliefs than those who say it is not true. The ones who say the bible is not true are less likely to publicly say that Muhammad was not a prophet contrary to the beliefs of over a billion people, some of whom have also demonstrated a fondness of dying for their beliefs.

Is the truth even worth dying for if there is such ambiguity about what is really true?  There seems to be an inordinate amount of emotion surrounding people’s notion of truth.

Is the President a Liar?

The President is widely decried as a liar because he says things that contradict what others regard as immutable truth. He regularly shows scant regard for the accuracy of numbers or dates, preferring instead to  paint a narrative. Like Longfellow’s highly fictional Paul Revere’s Ride, but without the eloquent poetry, Trump tells stories to get a point across. Those who listen to him and howl, “that’s not true”are not missing the point as much as they just viscerally disagree with the point he is trying to make.  And when he voices his aspirations in the guise of promises and then is unable to execute on those promises, like any accomplished adolescent, he blames the opposing party or fake news for holding him back.

In the final analysis he is right. Opposition to Trump has been breathtaking from even before he took office. It is often difficult to tell who the adults are and who are the petulant children.

Back on the subject of Constitutional Authority, there are academic arguments from constitutional scholars and jurists and then there is reality.

We previously commented on the constitutionality of quarantines. We demonstrated that the powers not delegated to the federal government are reserved to the states and to the people.   We also mentioned the troublesome Commerce Clause.

That statement made a lot of people’s heads explode. Dictators have absolute power. Presidents are supposed to bend to the will of the people, but not necessarily to all the people.  Just their kind of people. When Trump talks to his people, the OTHER people jeer at and mock them all.

Perhaps on a certain level they know he is right. If he were their President, they would cheer him on for taking decisive action and spending trillions of dollars of other people’s money. They intuitively know where the true (oops, there is that word again) power is; its the power of the purse.  The Federal government invents money, Congress votes on where it should go, and the President spends it.

This has sometimes been called the golden rule. You know, he who has the gold makes the rules.

Yet the predictably Leftist press labeled the demonstrations by ordinary citizens as “Right Wing.”  The street-fighting far right groups have failed to show themselves in public, but that did not stop the Guardian’s creative writing team from inventing an interesting headline:

Note the obvious lack of street-fighting far right groups.  The Constitution of Michigan of 1963 Article 1, Section 6 reads, “Every person has a right to keep and bear arms for the defense of himself and the state.”

Most states, including Michigan, have enacted laws that allow local authorities to take emergency actions, including enforcing quarantines and isolation. Michigan’s law (Act 302 of 1945)  that gives the governor broad authority to “to proclaim a state of emergency, and to prescribe the powers and duties of the governor with respect thereto; and to prescribe penalties.”

Notably Michigan’s law  “Subsection (1) does not authorize the seizure, taking, or confiscation of lawfully possessed firearms, ammunition, or other weapons.”

Relationship of the States to Donald Trump

During ordinary times, the Democrat governors of various states join with their partisan supporters to trash Trump and work tirelessly for his ultimate defeat. But during this time of emergency when the President declares the power of the President power to be total, and the Vice-President affirms that the power of the presidency is plenary, governors with their hands out for Federal dollars are far more deferential.

Some are more deferential than others.  The Republican governors always command respect from the President, but now New York Gov. Andrew Cuomo  and California Gov. Gavin Newsom, regularly receive his  high praise for their performance in managing the pandemic emergency.

Governor Whitmer on the other hand is the object of Trump’s disdain, complaining that “all she does is sit there and blame the federal government.”  Gov. Jay Inslee of Washington is also critical of the President prompting Trump to admonish the Vice-President, “not to be complimentary of that governor because that governor is a snake”

In the world of big egos and boundless ambition, state governors, in whose hands reside the execution of emergency measures,  go begging for Federal dollars, the true fountain of total authority.