So What Are We, Really?

You are here: Home / So What Are We, Really?

A Democracy or a  Republic?

We know what the Founders intended us to be: a constitutional federal representative democracy. But that’s a mouthful.

To be clear about the definitions, here is what we are not: a direct democracy. The people do not directly decide on every issue of government, even on the local level, and realistically not even on a family level. We all know that Mom rules!

Because of the division of powers between the people, the states, and the federal government, we are also a federal republic.

The Federal Government is composed of three theoretically co-equal branches: The Judicial, the Legislative, and the Executive. All three make decisions, laws, policies, regulations, and frequent mistakes with no or very little input from the people in whom ultimate authority resides. Judges are not supposed to legislate from the bench, but they occasionally do exactly that, at least in the opinions of those who disagree.The President through executive orders performs functions that are almost indistinguishable from the acts of the legislature.

One can argue that the legislative branch is the weakest of the three branches becasue they argue about everything, which is not a bad thing. When they vote, they are supposedly representing the will of the people.

If our elected representatives don’t do what we want, we vote them out of office. Right?

There are a few simple reasons that even if 90% of us want our Federal Government to do something, there is a low probability that it will be done unless a small percentage of our very special fellow citizens also want it. Before discussing who those special people are, let’s look at who we are:

We sometimes vote.  In the 2016 presidential election, 55.4% of eligible voters actually voted. Apparently a few ineligible voters also voted.  In local elections where democracy should be robust, such as schoolboard elections, voter turn-out is around 20%. 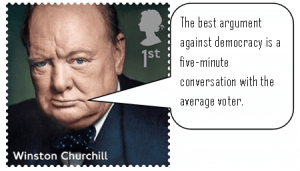 Even citizens who consider themselves well-informed are becoming infused with a cynicism that their voices don’t count. Interviews with young people reveal that public education has failed them.  Their lack of knowledge about our roots is appalling.  They don’t know why socialism is incompatible with our economy and inimical to our freedoms. The media on which we have relied in the past to inform us of current events appear to be more interested in promoting partisan divide and entertaining us with fabricated controversies. Their motives are rooted in playing to an ideological base for profit.

So if we, the average citizen who may or may not vote, have a limited voice in the affairs of state, economy, and taxes, who are the special people whose voices are heard?

Whose Voices are heard in Government?

A September 2014 study by Martin Gilens and Benjamin I. Page published by Princeton University convincingly identified whose voice is heard in the United States.  Gilens and Page write:

“Americans do enjoy many features central to democratic governance, such as regular elections, freedom of speech and association, and a widespread (if still contested) franchise. But we believe that if policymaking is dominated by powerful business organizations and a small number of affluent Americans, then America’s claims to being a democratic society are seriously threatened.”

Is the United States now an Oligarchy?

Based on their research, (PDF FILE HERE)  we are not a democracy but an oligarchy. Rich and powerful elite manipulate the levers of power and probably have done so to varying degrees since the founding of the republic.  They are not a monolithic bloc working for their own selfish ends against the interest of the masses. Certainly some, and maybe many, feel they are conducting their affairs from a superior position of enlightenment.

How people become members of the elite is beyond the scope of our discussion. Some are born to it; some may have superior intellect, some have good luck, and most have a combination of all these factors. They are not all individuals. Most in fact may be corporations whose officers seek economic benefits for their corporations, possibly to the detriment of the people, but often to the benefit of some of the people, their employees, and local communities.

Citizens applaud those corporations whose interests appear to align with theirs.  The Supreme Court has ruled that corporations have the rights of citizens, free speech, property rights, etc., and are free to spend large sums lobbying elected officials for policies that favor their business.

The right complains about the leftist bias of many media outlets, universities, Hollywood, some Silicon Valley billionaires, and George Soros.  The left demonize billionaire businessmen Charles and David Koch because of their solid support of free market capitalism.

This is not a new fight. Even in 1944, then Vice President Henry Wallace in a New York Times editorial worried about right-wing industrialists taking over the government. Dwight Eisenhower warned about the military industrial complex in his farewell address to the nation in 1961.

It is Time to Lose our Awe of Technology

We may now be faced with a more dangerous group of oligarchs than the robber Barons of the Gilded Age and even the Military Industrial Complex, which is still with us.

An essay by Joel Kotkin published by the Daily Beast in August 2016 details how the super-rich Silicon Valley elite  have our elected officials at all levels in their pockets.  Read about it HERE

There may be hope. Kotkin concludes with this paragraph:

“Yet over time grassroots Americans may lose their childish awe of the tech establishment. They could recognize that, without some restrictions, they are signing away control of their culture, politics, and economic prospects to the empowered “tools.” They might understand that technology itself is no panacea; it is either a tool to be used to benefit society, increase opportunity, and expand human freedom, or it is nothing more than a new means of oppression.”