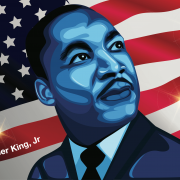 The vapid chattering class complains that the Founders were racist slave holders, that the Constitution says black men counted as only 3/5 of a person, and that this somehow discredits our entire foundation. To discredit the Declaration of Independence and Constitution on the basis of a faulty understanding of history is doing a great disservice to the legacy of Martin Luther King. King was a true patriot who looked to our founding documents as a fountain of inspiration and hope. He correctly understood that the Constitution is an aspirational document, a statement of what will be and must be, not a memorialization of what is set in stone.

There is little reason to doubt that King understood Jefferson’s dilemma.  Jefferson clearly detested slavery but he had many difficult choices. He could work for a union of the colonies to found the United States, or he could work to abolish slavery; he could not have both.

“There must doubtless be an unhappy influence on the manners of our people produced by the existence of slavery among us. The whole commerce between master and slave is a perpetual exercise of the most boisterous passions, the most unremitting despotism on the one part, and degrading submissions on the other. Our children see this, and learn to imitate it; for man is an imitative animal. This quality is the germ of all education in him.” (Notes on the State of Virginia, Query XVIII: Manners)

Jefferson realized that slavery was a cancer  on society but he also knew it would take time and education to correct the evil.  Looking back, Jefferson undoubtedly knew the long history of slavery stretching back millennia. Looking forward and knowing that his current generation had learned by the example of slavery, Jefferson could only imagine its eventual demise.  During his life he made a number of proposals to gradually eliminate slavery, recognizing the almost insurmountable economic barriers at his time.

Immediate gratification is an attribute of children and adolescents.  Wise men know restraint and patience.  Undoubtedly Dr. King knew this because he chose the path of restraint and non-violence to achieve his goals. His goals are not yet achieved but his legacy serves as an example to those who continue the task.

Let’s put the 3/5 of a person problem to rest. Article 1, sections 1 & 2 of the Constitution outlined how representatives to the House of Representatives would be apportioned among the states.  The new nation being formed was a tinderbox of dissension.  It was only through compromise that the nation got a start and left the question of slavery to be settled during the Lincoln presidency and a terrible civil war.

The Enumeration Clause says:  “Representatives and direct Taxes shall be apportioned among the several States which may be included within this Union, according to their respective Numbers, which shall be determined by adding to the whole Number of free Persons, including those bound to Service for a Term of Years, and excluding Indians not taxed, three fifths of all other Persons.”

This section was later modified by the 14th amendment, section 2. It was purposely left vague. The founders envisioned a Constitution that would change over time. It does not say that a black man is 3/5 of a person! It talks about free Persons. Stay tuned to this language as the 2020 census counts free Persons living within the “Union.”

The Negro and the Constitution

The Negro and the Constitution is the title of  Martin Luther King, Jr.’s winning high school essay.  It clearly shows that Dr. King looked to the Constitution as well as to his faith to achieve the equality that they promise.  King saw Lincoln’s Emancipation Proclamation as the embodiment of the equality promised,  but not immediately delivered, by the Declaration of Independence and Constitution.

“Negroes were first brought to America in 1620 when England legalized slavery both in England and the colonies and America; the institution grew and thrived for about 150 years upon the backs of these black men. The empire of King Cotton was built and the southland maintained a status of life and hospitality distinctly its own and not anywhere else.

On January 1, 1863 the proclamation emancipating the slaves which had been decreed by President Lincoln in September took effect–millions of Negroes faced a rising sun of a new day begun. Did they have habits of thrift or principles of honesty and integrity? Only a few! For their teachings and duties had been but two activities–love of Master, right or wrong, good or bad, and loyalty to work. What was to be the place for such men in the reconstruction of the south?

America gave its full pledge of freedom seventy-five years ago. Slavery has been a strange paradox in a nation founded on the principles that all men are created free and equal. Finally after tumult and war, the nation in 1865 took a new stand–freedom for all people. The new order was backed by amendments to the national constitution making it the fundamental law that thenceforth there should be no discrimination anywhere in the “land of the free” on account of race, color or previous condition of servitude.

Black America still wears chains. The finest Negro is at the mercy of the meanest white man. Even winners of our highest honors face the class color bar. Look at a few of the paradoxes that mark daily life in America. Marian Anderson was barred from singing in the Constitution Hall, ironically enough, by the professional daughters of the very men who founded this nation for liberty and equality. But this tale had a different ending.

The nation rose in protest, and gave a stunning rebuke to the Daughters of the American Revolution and a tremendous ovation to the artist, Marian Anderson, who sang in Washington on Easter Sunday and fittingly, before the Lincoln Memorial. Ranking cabinet members and a justice of the Supreme Court were seated about her.

Seventy-five thousand people stood patiently for hours to hear a great artist at a historic moment. She sang as never before with tears in her eyes. When the words of “America” and “Nobody Knows De Trouble I Seen” rang out over that great gathering, there was a hush on the sea of uplifted faces, black and white, and a new baptism of liberty, equality and fraternity. That was a touching tribute, but Miss Anderson may not as yet spend the night in any good hotel in America. Recently she was again signally honored by being given the Bok reward as the most distinguished resident of Philadelphia. Yet she cannot be served in many of the public restaurants of her home city, even after it has declared her to be its best citizen.

So, with their right hand they raise to high places the great who have dark skins, and with their left, they slap us down to keep us in “our places.” “Yes, America you have stripped me of my garments, you have robbed me of my precious endowment.”

We cannot have an enlightened democracy with one great group living in ignorance. We cannot have a healthy nation with one tenth of the people ill-nourished, sick, harboring germs of disease which recognize no color lines–obey no Jim Crow laws. We cannot have a nation orderly and sound with one group so ground down and thwarted that it is almost forced into unsocial attitudes and crime. We cannot be truly Christian people so long as we flaunt the central teachings of Jesus: brotherly love and the Golden Rule. We cannot come to full prosperity with one great group so ill-delayed that it cannot buy goods. So as we gird ourselves to defend democracy from foreign attack, let us see to it that increasingly at home we give fair play and free opportunity for all people.

Today thirteen million black sons and daughters of our forefathers continue the fight for the translation of the 13th, 14th, and 15th amendments from writing on the printed page to an actuality. We believe with them that “if freedom is good for any it is good for all,” that we may conquer southern armies by the sword, but it is another thing to conquer southern hate, that if the franchise is given to Negroes, they will be vigilant and defend even with their arms, the ark of federal liberty from treason and destruction by her enemies.

The spirit of Lincoln still lives; that spirit born of the teachings of the Nazarene, who promised mercy to the merciful, who lifted the lowly, strengthened the weak, ate with publicans, and made the captives free. In the light of this divine example, the doctrines of demagogues shiver in their chaff. Already closer understanding links Saxon and Freedman in mutual sympathy.

America experiences a new birth of freedom in her sons and daughters; she incarnates the spirit of her martyred chief. Their loyalty is repledged; their devotion renewed to the work He left unfinished. My heart throbs anew in the hope that inspired by the example of Lincoln, imbued with the spirit of Christ, they will cast down the last barrier to perfect freedom. And I with my brother of blackest hue possessing at last my rightful heritage and holding my head erect, may stand beside the Saxon–a Negro–and yet a man!”