The Death of Julius Caesar

You are here: Home / The Death of Julius Caesar 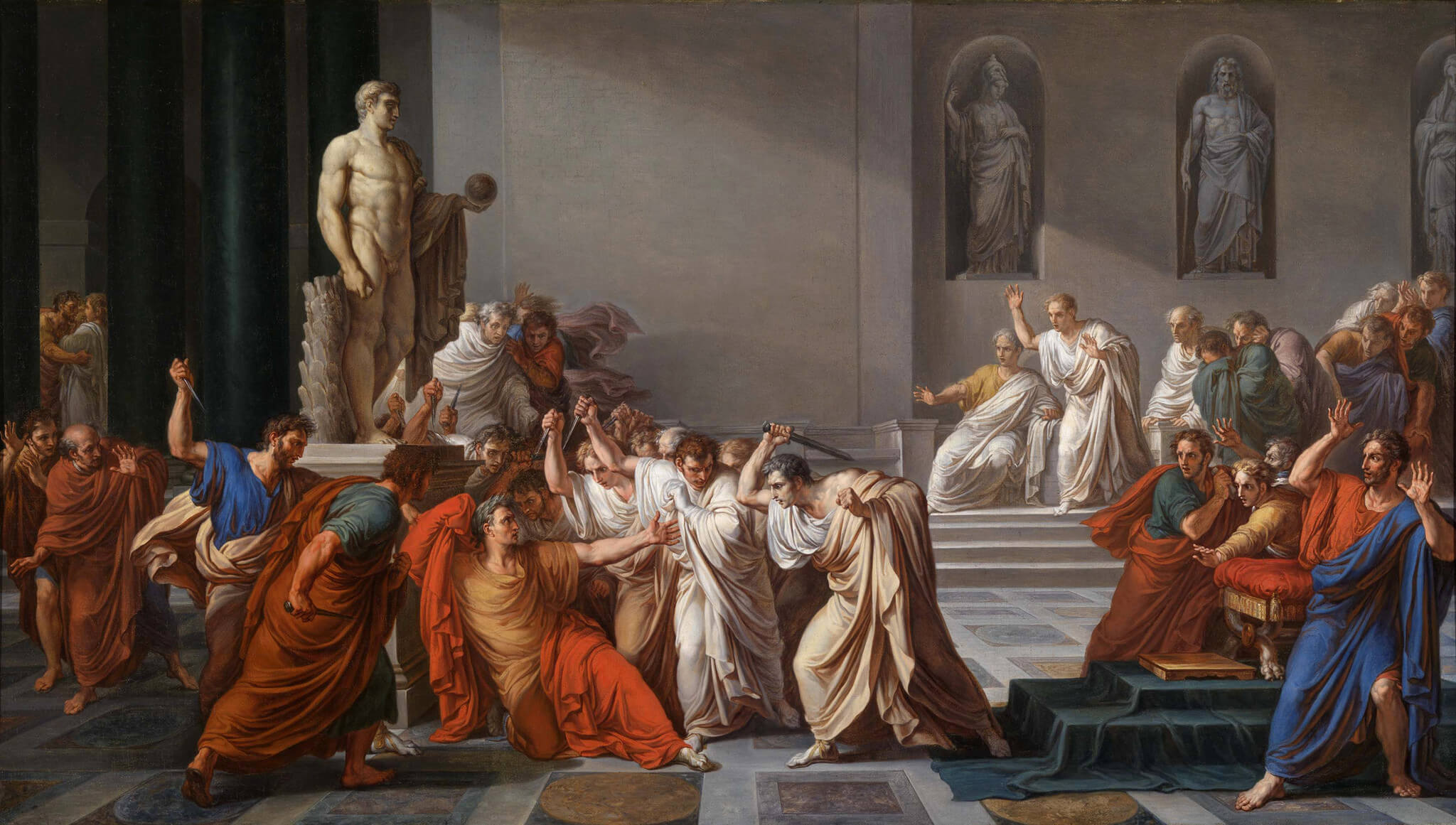 The Death of Julius Caesar by Vincenzo Camuccini

Most people have heard of the death of Julius Caesar made popular by William Shakespear’s play “The Tragedy of Julius Caesar.”  Some may vaguely remember from high school history about Caesar crossing the Rubicon and declaring, “let the die be cast,” especially those who studied Latin and struggled through Caesar’s Commentaries on the Gallic War (Bellum Gallicum). But few have really studied the history of the Roman Republic and Caesar’s rise to power, or contemplated the historical significance of his assassination.

Shakespeare apparently drew his play from Thomas North’s translation of Plutarch’s Lives. His emphasis was on artistic expression, not historical accuracy. At this point we should mention that the man named William Shakespeare may not have actually written the plays attributed to him, but that is an argument about historical accuracy for another time.

Octavius took over the reins of government under an arrangement with the senate that preserved the appearance of a republic. In reality he was a dictator. He skillfully manipulated the political environment including adopting personal names that hid his aristocratic background. Octavius became  Augustus Caesar, the first emperor of Rome.

He operated under power granted to him for life by the senate. His title, Princeps Civitatis (“First Citizen of the State”) rejected implications of monarchy or dictatorship. After slaughtering all who stood in his way, he assumed the role of an enlightened leader combining control of the military, civic institutions, and the traditional religion. He imposed political, social, and moral reforms that brought stability, security, and prosperity, laying the foundations of the 200-year Pax Romana (Roman Peace) and an empire that lasted for nearly 1,500 years.

Nevertheless he and subsequent emperors of Rome were in fact dictators. The feeble attempt at representative democracy of the Roman Republic died with Caesar and authoritarian government was born with Augustus.

Assassination of a President 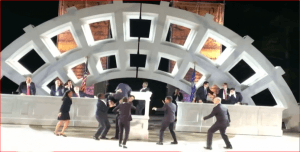 In the summer of 2017, The Public Theater presented a free performance of Shakespeare in the Park, performing Julius Caesar featuring a diverse group of Americans playing the parts of the Senators that assassinate Julius Caesar. The fact that Julius Caesar resembled President Donald Trump disturbed a lot of people and the play was the subject of several peaceful protests by individuals disrupting the performance.

Public Theater’s website clearly presents the sentiments of Oskar Eustis, the artistic director of the play.

“Julius Caesar can be read as a warning parable to those who try to fight for democracy by undemocratic means.
To fight the tyrant does not mean imitating him.” – Oskar Eustis

The website continues: “Magnetic, populist, irreverent, he seems bent on absolute power. A small band of patriots, devoted to the country’s democratic traditions, must decide how to oppose him.”

They clearly label Donald Trump as, “bent on absolute power” and the murderous senators as a small band of patriots.

“Those who cannot remember the past are condemned to repeat it”

There is little doubt that Julius Caesar was an ambitious man, as is Donald Trump. Both are showmen. Donald Trump is certainly a populist. Those who know Trump may dispute that he is irreverent. But are Caesar and Trump tyrants like Hitler or Patriots like Gandhi?

Neither. Simple comparisons and talking points fail to express the lessons of history. People learn about our political leaders through the biased lens of the mass media and each citizen gravitates toward the news outlet that confirms his own subjective preferences, which are often not well defined.

Trump is not evil incarnate. It can be argued that he does not display the cerebral qualities that Obama displayed, mainly by keeping his mouth shut. Neither is a philosopher-in-chief. Both are crass politicians, although there may be hints that Trump is clumsily going through the pains of being president for altruistic motives.

Calls for Trump’s removal buy Impeachment is a modern day equivalent to the way Caesar was removed from office. It is a betrayal of the Constitution. His apparently clumsy politics is not a High Crime or Misdemeanor.

The Senators in Rome couldn’t impeach Caesar so they got rid of him in a traditional way for the times.  What was his high crime that deserved the death penalty? He became a threat to the power of the entrenched aristocracy. Does this sound familiar?  The political Left, prone to violence everywhere in the world, now wants to get rid of President Trump with little or no thought to the damage they are doing to the rule of law and the Constitution. One can only imagine the unintended consequences.

For Rome, the unintended consequence was the destruction of the Republic and more than a thousand years of dictatorship under emperors. The fall of the Roman Empire came in September 476 AD when the last Roman emperor of the west, Romulus Augustulus, was deposed by a Germanic prince called Odovacar. The western world plunged into the dark ages until the Renaissance beginning in the 14th century.

Technology will save us from another dark ages but the Law of Unintended Consequences may condemn us to an equally dark future.