The Founders of our Republic devised a remarkable system of government that has withstood many fiascos similar to the embarrassing displays of our current crop of partisan ideologues.  George Washington was a genius, a fact lost on generations of Americans who don’t even know who the protagonists were in our War for Independence. In fact such people don’t even know what the word “protagonist” means.

George Washington warned about the advent of political parties in his time.

“However combinations or associations of the above description [political parties] may now and then answer popular ends, they are likely, in the course of time and things, to become potent engines, by which cunning, ambitious, and unprincipled men will be enabled to subvert the power of the people and to usurp for themselves the reins of government, destroying afterwards the very engines which have lifted them to unjust dominion. .”  –  Washington Farewell Address, September 17, 1796

“We must always remember that it is when passions are most inflamed that fairness is most in jeopardy. ”

“In our intense focus on our differences, we have forgotten the common values that bind us together as Americans.” 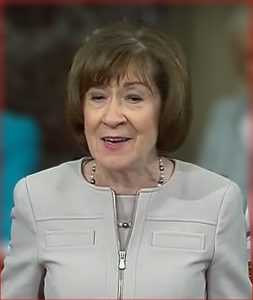 Senator Susan Collins’ speech on the floor of the Senate in support of Judge Kavanaugh was remarkable in many aspects. It carefully and thoroughly dismantled the arguments being fed to the obedient sheep who dutifully demonstrate at the behest of puppet masters whose true motives remain invisible to them.

Roe v. Wade is the rally call but the puppet masters have an eye on a far bigger prize.

One of those puppet masters, in a rare glimpse into his motives, reveals why he stays in the shadows:  “I shall not spell it out here because it would interfere with my flexibility in carrying it out…” If this snippet arouses your curiosity, you may follow it HERE.

But for now, the focus is on the clarity of Senator Collins’ speech.

Her speech revealed the great extent to which she and her staff went to fulfill her duty as a Senator when required to give her advice and consent to the appointment of Brett Kavanaugh to the Supreme Court.

She started by giving an accurate description of the extensive opposition to the nomination characterized by special interest groups who whipped their followers into a “frenzy by spreading misrepresentations and outright falsehoods.”

Senator Collins then outlined the methodical process she used to evaluate Judge Kavanaugh’s qualifications. Her analysis of his judicial record is particularly riveting.  Rather than commenting on every aspect of her analysis, you may read it in THIS  [opens on PDF file] transcript of her speech, or you may watch the video of the speech below.

Join
John Locke Should Be Counted among the Founding Fathers

Why do we Commemorate Veterans’ Day?
Scroll to top