Articles
You are here: Home / Articles / Featured / Why do we Commemorate Veterans’ Day?

Memorial Day or Decoration Day is the U.S. federal holiday to remember people who died while serving in the  armed forces. Veterans’ Day on the other hand is to express gratitude to those both living and dead who served honorably in the armed forces during times of peace or times of war.

In contrast to the purported abuse of veterans returning from Vietnam, today’s veterans seem to be enjoying an exaggerated and somewhat politically correct display of gratitude from all quarters of society. That is not a bad thing. Gratitude is a noble human emotion that enriches an entire society. Perhaps society now needs to display a slightly exaggerated degree of gratitude to make up for past selfishness, and to teach the concept of gratitude to younger generations.

Is it possible that the reports of hippies spitting on soldiers returning from Vietnam in the early 1970s were “fake news?”  The New York Times addresses this question in an opinion piece from  2017.  As vitriolic as the anti-war rhetoric was during the Vietnam conflict, most of it was directed at political leaders; nevertheless, there is little doubt that isolated instances of abuse were directed at individual soldiers.

Homecoming: When the Soldiers Returned From Vietnam was a book by Bob Greene that explored this issue.

We now talk about wounded warriors and heroes in a way totally foreign to the rhetoric surrounding the Vietnam Era, the period from February 28, 1961 to May 7, 1975.

Battlefield survival among American soldiers was only marginally better than during the two world wars. Undoubtedly many wounded soldiers in Korea or Vietnam would have survived if they had the battlefield care experienced in our current middle east engagements.

Comparing casualties of America’s wars can be misleading. A “casualty” is a combatant  lost through death, wounds, injury, sickness, internment, capture, or through being missing in action. In the American Revolutionary war and Civil War, far more people died from disease than were directly killed in battle. Accurate counts are impossible.

A useful metric that demonstrates the technological efficiency of war is the ratio of deaths to the number of soldiers deployed. When muskets, swords, and infantry were deployed, death from infection after the battle contributed to the overall death toll. Our deadliest war, the War between the States, had between 618,000 and 750,000 deaths. By contrast, drones, aircraft, rockets, and armament reduced the death toll in recent engagements in Iraq and Afghanistan to under 7,000.

Thank You for your Service

As a veteran from the Vietnam era, I feel a bit uncomfortable when people say, “Thank you for your service.”  I went into the Air Force more for professional development and to avoid being drafted than as a call to patriotic duty.

I enlisted because my deferment ended at graduation and I may have been drafted into the Army. Everyone knows the cushy jobs are in the Air Force. So when people say, “Thanks.” I think to myself, “I went in to avoid the draft and possibly be sent to a really bad spot in Vietnam and maybe not return.”  It was an easy decision.

In addition I got some excellent training under almost luxury conditions. The Air Force paid for two babies. I get a free grave and headstone someday. VA loans for several houses have more than compensated me for my “service.” Home Depot even saves a parking space for me if I get there early enough to beat out the other Vets.

But to all veterans out there whose military experience was not as selfishly motivated as mine, and especially to veterans who returned from service damaged in some way, “Thank you for your service, and may a grateful nation compensate you appropriately.”

Oath to Support and Defend the Constitution

All members of the U.S. Military take an oath to support and defend the Constitution of the United States. It has been my experience that citizens who have served in the armed services take this oath very seriously and continue to honor the oath for the rest of their lives.

Federal civil service employees take the same oath to support and defend the constitution. Since the Constitution guarantees our Liberty and enumerated rights, why should we fear a bureaucracy sworn to protect the Constitution?

When the Internal Revenue Service, or the State Department and possibly even the FBI act with partisan disregard for the rights of all citizens, what remedies do the People have?  The military protects us from foreign enemies, but when the enemy is within, who protects us?

Indeed it may be argued that the greatest actual threat to our Liberty comes from within, from a poorly educated populace who vote for politicians who pander to their basest instincts.

As we often do in these pages, we make an appeal to authority to bolster the claim that such a threat to Liberty comes from within. Senator Eugene Joseph “Gene” McCarthy, a Democrat from Minnesota and opponent of the Vietnam War said, “The only thing that saves us from the bureaucracy is inefficiency. An efficient bureaucracy is the greatest threat to liberty. – Time magazine (12 February 1979)

It’s pretty obvious that some politicians are shameless political hacks regardless of their political party. Others, however, demonstrate a devotion to service and the country. Among them are the  75 members (possibly 76) of the House of Representatives who are veterans, 18 Democrats and 57 Republicans.  It is they, our elected officials and veterans among them, who must be chosen wisely to protect our Liberty.

According to lists compiled by CQ (Congressional Quarterly), the House as of September 11, 2018, has 76 veterans (including two female Members, as well as one Delegate); the Senate has 17 veterans, including two women.  These Members served in the Korean War, the Vietnam War, the Persian Gulf War, and combat or peacekeeping missions in Afghanistan, Iraq, and Kosovo, as well as during times of peace. Seven House Members and one Senator are still serving in the reserves, and six House Members are still serving in the National Guard. All of the female veterans are combat veterans. 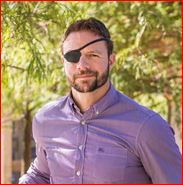 His military service as a Navy Seal took him to Afghanistan where an IED blast damaged is sight; nevertheless he went on to complete two deployments, once to the middle east and again to South Korea. He left service in 2106 with two Bronze Stars (one with Valor), the Purple Heart, and the Navy Commendation Medal with Valor.

Dan’s father worked in the petroleum industry and moved the family all over the world including Colombia and Ecuador where Dan became fluent in Spanish. He is a graduate of Tufts University (bachelor’s) and Harvard University (Masters of Public Administration). At age 34 he is Texas’ youngest congressional representative. With his excellent military and academic training, he will be a strong voice for Texas in Congress.

Crenshaw won his Congressional race with 53.4 percent of the vote over his Democrat opponent. He became famous because of the abuse heaped upon him by a lame Saturday Night Live skit.

This video from Fox News shows why we celebrate Veterans’ Day and why 74% of citizens support and have confidence in the military.

Is the U.S. Constitution Outdated?
Scroll to top